Walking through the exhibit hall yesterday, I noticed a man in a Superman cape bouncing quarters off a slab of granite onto a table filled with drinking glasses and plastic cups adorned with superheroes. The man’s name is Ryan Dawson and his company, The Hidden Cape Foundation, is a non-profit organization dedicated to helping families who have loved ones in the hospital. This year atComicpalooza, however, the money he raises will go to a slightly different cause.

“We’re out of Moore, Oklahoma,” he explained, “so we don’t have a hospital currently to work out of.” Ryan wants to help victims of last week’s devastating tornado by raffling a Justice League prize package, which includes a Justice League hardback book signed by writer Geoff Johns and artist Jim Lee, an issue of Justice League #1 signed by Jim Lee and inkist Scott Williams, and a full set of Justice League action figures signed by artist George Pérez, who will be at Comicpalooza today as well. 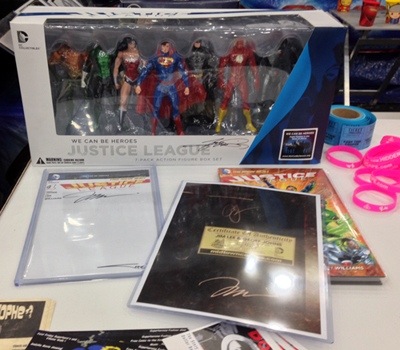 For $5, attendees will get one ticket for the raffle and a colorful wristband to show their support for Hidden Cape. With the wristband comes unlimited play of the quarters game Ryan was demonstrating when I walked up. The rules are simple: make a quarter in a cup, choose your prize. Prizes include autographed headshots, movies, collectibles, a wide range of prizes anyone would be glad to throw a few quarters at. All of those quarters will then be donated to the Make-A-Wish Foundation. I asked Ryan where he gets all of his great prizes. “The amazing thing is that all of the wonderful celebrities that we meet at every single event we do give us tons of support. The majority of our prizes are donated from them.” Celebrities such as Ray Park, best known for playing Darth Maul in Star Wars: The Phantom Menace, and actor/contortionist Doug Jones, who played Abe Sapien in theHellboy movies, have all donated signed prizes to the cause. Ryan adds, “Butch Patrick, who was Eddie Munster, actually moved his booth next to ours at our last convention.”

Also manning the Hidden Cape booth with Ryan was Christophe Murdock a musician with ties to Oklahoma. “Moore was my home for years. I lived there, worked there, played music there. Many of my friends live and work there.”

The last day of a convention is a great time to see everything without the overwhelming crowds of Saturday. So come out and buy yourself a Teenage Mutant Ninja Turtles knit beanie and give $5 to help out some folks in need. You might even win that autographed set of Justice League figures. Those will fit nicely on your mantle.