Mockingbird Lane2003 DemoOK, we have a five song demo here that is pretty damned cool. My favorite track is probably Wolfshead but they are all good. I could have done without the acoustic version of Taken Under, but that's just a matter of taste, I'm just not a fan of acoustic songs, if you are then you'll probably like it. The singer has a good voice and the songs while not studio quality are very listenable (I actually prefer to listen to stuff of this level of recording quality, makes it sound more raw). I understand that these guys are working on thier first release and I'll look forward to hearing it. I think most horror fans would probably get really into this, so I would try to get yourself a copy of this demo or ML's upcoming release. Really like the name too, it's obvious these guys have their heart in the right place (a jar in thier laboratory).

Mockingbird Lane - 2003 Demo Horror punk is quickly becoming my newest guilty pleasure. But there is nothing to feel bad about in digging Mockingbird Lane. Unlike other horror punk bands, MBL is much less aggressive and considerably more melodic. While purist may not like their lack of violent trashing, it would be a crime to waste Christophe’s fantastic voice on undecipherable screams. There is an undeniable goth-rock influence on MBL and I think this only makes them more interesting and unique. It also makes their songwriting much more accessible to those of us who don’t really care for the Misfits. Oh, but if you like Glen and the boys, MBL dish up a pretty sweet cover of “She.” But the real treat on this demo is the acoustic version of “Taken Under.” The distorted guitars and drums are replaced by acoustic guitar and the most perfectly subdued keyboards EVER. While I want MBL to keep rocking, I would kill to hear an all acoustic album from Christophe and company. (RM)

MOCKINGBIRD LANE2003 Demo(Self Released)Rating: 3.5 Few things frustrate me more than great songs not given the treatment they deserve. And the first song on this cd, "Taken Under" is indeed a great song. The problem is that I have a hard time listening to it on this demo because I'm torn between taking simple pleasure in how good the song is and being frustrated by what the song isn't. What it is is a fantastically catchy and infectious Goth-Rock song which unfortunately sounds as though it was recorded on a cheap boombox at the bottom of a swamp. OK, I realize the word, "demo" is printed prominently on the cover and have taken that into consideration. The fact of the matter is this is the kind of song that would benefit greatly from some bombastic over-production. The other songs on the CD "I...Vampire" and "Wolfshead" are pretty straight forward, run-of-the-mill Goth-tinged Horror Rock. That kind of stuff generally sounds OK when recorded on substandard equipment. Obviously, any song can benefit from better production but there's really no point in putting a flea market velvet Elvis painting in a gold-encrusted frame. There's also a cover of "She" on here in case there's anybody out there who hasn't heard enough Misfits covers.-Big Tony O'Farrell

This demo by Oklahoma’s deathrock band Mockingbird Lane starts with their single “Taken Under” (along with an excellent acoustic version) and then launches into a rousing cover of the Misfit’s “She”. The hard driving “I Vampire” and “Wolfshead” are soon to be released on a upcoming compilation. We hope we can soon hear a full length release from Mockingbird Lane. This is some good stuff! Enoughsaid!

Straight outta OKC (that's Oklahoma City) comes the Death-Rock / Horror-Punk band known as Mockingbird Lane. The band, fronted by Christophe, has been around in one form or another since the early to mid 90's, but never got serious until 2002. The band has had more line up changes than the Misfits, with reportedly almost no two shows ever having the same members on stage. At the moment, the group is: main man Christophe - vocals, guitar, bass, & synths; Blizzard (a bona fide Satanist) - drums, bass, programming, & backing vocals; Doruinn Flur - guitar, synths, & backing vocals; BJ - backing vocals, guitar, bass, & drums. This of course will probably change any second. These guys seem to be the real deal, gothic and horror influences abound. At one point the band was even using a supposedly haunted funeral chapel in the town of Noble as a practice space! Sometimes even having to practice around the dead body that was on display earlier in the evening! To date, the band only has two releases to their credit, a CD single, and this five-track demo. What we have here is the song "Taken Under" (both plugged and unplugged versions), a cover of the Misfit's classic "She", and two more originals ("I... Vampire" and "Wolfshead"). The best of the bunch is Taken Under, which is why I guess we're treated to two versions. I'm not sure which I like best, "rockin' out" is always a plus, but the acoustic take on the song is pretty cool. In any regards, this is the most Goth-esque of the bunch. Once we reach the familiar sounds of She, it seems like the Misfits influence sinks its teeth into the band for the remainder of the disc. The production here is pretty lo-fi (read crappy), with odd sounding guitar and bass tones that one usually finds associated with outer fringe Stoner-Rock bands. But somehow, it helps, sort of adding an aura of street-level authenticity to the whole affair. What's the bottom line you ask? Well, it's very enjoyable stuff, especially if like me, you have a taste for horror-tinged Punk and all things dark. The real only problem is that this is not much more than a tease, come on Christophe, give us a full-length to sink our fangs into. For more info, you can check out the band's official page.
RATING = 7 Death-Rock / Horror-Punk (Released 2003)

MOCKINGBIRD LANE - 2003 Demo Mockingbird Lane are a death/horror rock band based out of Oklahoma … and I'll be reviewing their five tracks "2003 Demo". Two versions of the love lost song "Taken Under", the "single mix" and an "acoustic mix". I guess it's good in that it shows another side of the band, but the acoustic mix didn't do much for me, I prefer the single version. They do a cover of The Misfits "She"… one thing about covers is that I like to hear a band do something different with the original and make it their own rather than just a carbon copy, which is the case with Mockingbird Lane's version. The last two songs are what make the demo sustainable, "I … Vampire" and "Wolfshead" are great songs.Not bad at all for a fairly new band. I look forward to hearing this band grow in the coming years and progress. The 2003 Demo is available on their site. (Bobby) 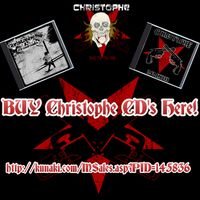