'Son of the Saw' Review on Zisi Emporium for B Movies

Zisi Emporium for B Movies just posted a review of 'Son of the Saw'! Check it out HERE.


Son of the Saw, The Legacy of Leatherface

In 1974 we were shocked. Who can forget...as John Larroquette narrates, we are in a wooden coffin with a decomposing corpse. If that were unsettling enough, some creep is prying it open. Each time light penetrates the long darkened inside of the coffin we see more of the decomposing corpse. This macabre opening will serve as the opening scene to "The Texas Chainsaw Massacre." Sequels, a re-make, and sequels of the remake...even a 3D effort would ensue. But wait! There is a suggestion that this family, Leatherface and his kinfolk, may have been real. What is the history, myth and fact, of Leatherface and his family? Did they exist? 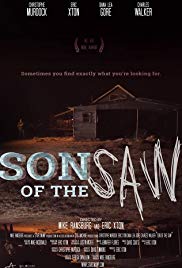 Today we look at a 2018 horror short (26 minutes) called "Son of the Saw."  A TV show host (Charles Walker) and his crew have the same questions I posed above. Being the competent investigative reporter that he is, he and his young crew end up at an east Texas home that Leatherface hailed from. No big deal...Leatherface is long gone...or is he? The crew isn't immediately welcome...as a weird guy armed with a shotgun (Eric Xton) has no use for city folk. The reporter then does what he does best...get people who don't want to talk...to talk. Our redneck with a shotgun invites them all in to hear the real story of Leatherface. 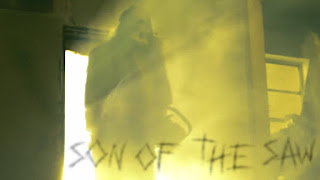 Some stories are best left untold, unfortunately TV reporters never can grasp that logic. The small house on a Texas plain is packed with...well...it's weird. They are presumably family members and probably kinfolk of the famous Leatherface and his cannibalistic family. The ensuing story is creepy and the setting is ominous and claustrophobic. We see the impending peril before the TV crew. Then he shows up...or should I say, He shows up. The account we have heard suggests Leatherface is some sort of a deity and what's going on on this property is cult-ish. The He, 'Son of the Saw', that shows up is armed with a chainsaw. The chase is on and what happens next may not be too unpredictable ...but what is incredibly frightening is the synergy that inspires the whole clan. Not to give too much away, but the horrific and grotesque will be joined with the taboo and forbidden, so be prepared for an incredibly awkward and uncomfortable viewing experience. 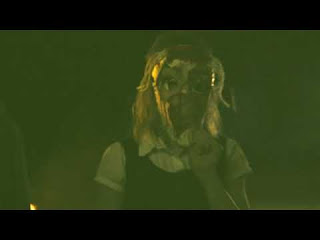 Eric Xton and Mike Ransburg directed this horrific short film with the intention of giving us a 100% horror film. No feel good moments...no rests from the scares...no humorous interludes...just graphic horror in what is on the screen and what goes on in your mind as you view it. Christophe Murdock is terrifying and menacing as the Leatherface incarnate, so be warned. For a frightening half hour, find "Son of the Saw," and be warned...it indeed captures the horror and taboo setting of the 1974 shots from inside the coffin that originally gave us "The Texas Chainsaw Massacre."
Posted by Christopher Zisi at 4:46 PM