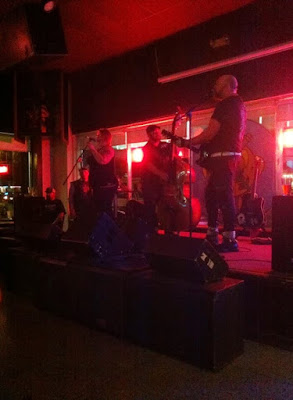 R.I.P. Chad Hunnicutt. You were a friend to everyone on the scene. It's sad to see you go.

I could only find one photo of us playing together. This is a Christophe set at VZD's on 10-29-13. In this pic Misty joined us on the vocals for a cover of "Folsom Prison Blues". It was always fun to jam with Chad and good to see him when he was running my sound or when he booked me to play his bar. I wish we could have done more together.

There will be a farewell and celebration of his life Feb. 9th at Tower Theater.

The following was taken from Misty Hunnicutt's Facebook page.

Son. Husband. Dad. Poppi. Friend. Chad Wayne Hunnicutt, of Oklahoma City, left for Valhalla on January 27, 2020.
Born December 1, 1974 to Frank and Pam, he inherited his love of tinkering with motors of all sorts from his grandfather. As avid music lovers, he and his wife Misty met when he was doing sound engineering for a local band. Starting as best friends, Chad and Misty spent almost 20 years making memories together. Beyond sound engineering, Chad possessed a unique level of musical talent, able to play any instrument he set his hands to. Through the course of his life, he was a member of many bands in and around the Oklahoma City area, including Duke Wayne, United Fists, Muck Savages, and Your Mom. Described by friends as the life of the party, his sense of humor was unparalleled, as was his generosity and sensitivity. A friend to anyone who had a moment, Chad truly cared about everyone in the community, often going out of his way to ensure that everyone had the support they needed.
Chad is preceded by his grandmothers Rosalie Patterson and Bonnie Hunnicutt; survived by his loving wife Misty; daughter Taylor Adams and granddaughter Thora; parents Pam and Frank Hunnicutt; grandfathers Johnny Patterson and Glen Hunnicutt; brother Brad Hunnicutt; and family of the heart Steve Fillmore, Brandon Smith, Kent Deewall, Carson Barbour, Cara Belt, Crystal Marie, and Margaret Nash.
Join us in saying farewell and building community during the Chadibration on February 9 at the historic Tower Theater on NW 23rd Street at 7pm.