Pray To The Saw Reviews

Some Reviews of "Pray to the Saw" were posted on The Grinder yesterday here: https://metalcoffeegrinder.blogspot.com

On this episode of an Old School Album Review Christophe Murdock titled "Pray to the Saw." 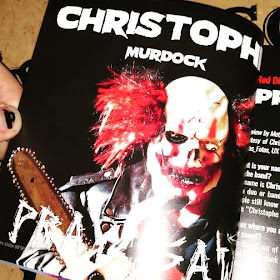 On this episode of an Old School Album Review we're taking a look at a single
release from  Christophe Murdock titled "Pray to the Saw."
We've asked a few of our peers in the music industry to listen to it and give their
feedback.
Let's hear what they had to say..

"Nothing like a little murder to start off a morning! The dark spaghetti-western
sound, with the rock-a-billy attitude is a great mixture you usually only hear in
Rob Zombie flicks. I surely enjoyed this folk-terror rock song, could have been
a bit longer. I'll absolutely be looking forward to hearing more from Christophe
Murdock and the gang."

"Ooookay, this was not at all what I expected from the thumbnail pic in the
YouTube video and the horrific sound effects s that open the track... I was
expecting thrash/death metal but instead I got bluesy rockabilly that sounded
like something Chris Isaak would have whipped up for a theme song to a
Texas Chainsaw Massacre sequel. Well played, Mr. Murdock, well played.
This is not my usual  kind of meat by any means,  but horror aficionados
should dig."

"An interesting twist of country and psychedelic guitar riffs. This is definently
the output of when metal heads decide to have a country side project. I could
tell that country definently wasn't the only genre they are able to play. Although
I'm generally not a huge country fan, this caught my attention and had a great
guitar solo and was well put together."

"This is just a really fun song here. I'm reminded of a horror movie soundtrack but
with an amazing guitar solo with some SIC higher notes. The whole song comes
together well and moves in that creepy vibe on it's way through. I loved the
rockabilly sound with the verses. Great vocals too this is a really awesome tune
that I enjoyed."

Special thanks to our review panel this week.

Here's the song feel free to tell Christophe what you think about it as well.