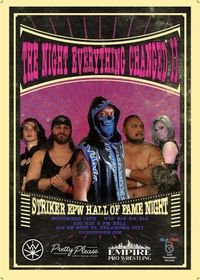 Come out and support your local pro wrestling promotion, Empire Pro Wrestling!! You will see some of the best wrestlers in Oklahoma and surrounding regions. It is the night former EPW Heavyweight and All American Champion Striker is inducted into the EPW Hall of Fame!! The former Impact Wrestling and NXT star, the 7 foot Jack Talos will be there! Also the CYN and NWA star Leo Fox will be in action! You will also see the 3 time EPW All American Champion Logan Knight!! Plus you will see the EPW Heavyweight Champion Maddox Jones and EPW Tag Team Champions The Pyschotic Messengers all defend thier titles! You will also see Devion Black, Tank Bryson, Adrian Vega, Tego, Dominick Whiteheart, Marce Lewis, and many more!! Bring your whole family, invite all your friends, even bring your neighbors!! Come cheer the good guys and boo the bad guys as you enjoy some old school wrestling, new school wrestling, wrestling you've never seen before that will have you on the edge of your seat!! We will have merchandise tables, also a concession stand to get your favorite cold drink and snack!! Whatever you do, you won't want to miss this show!! Tickets are $15 for VIP and General Admission $10!! Bring your signs and show us who the super fan of Empire Pro Wrestling really is! VIP at 5:30 pm, Bell time at 6 pm. Empire Pro Wrestling's The Night Everything Changed II show is located at 400 SW 66th St OKC OK 73139! So share this post, invite all your friends and family and have an amazing day of hard hitting Pro Wrestling action!!